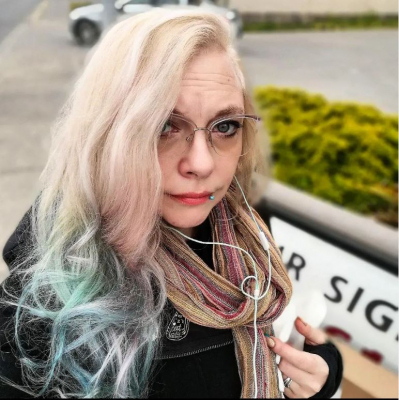 Auliya has been in the Optical business since 2007, and graduated from the Optical Sciences Program at the Northern Alberta Institute of Technology via distance education while managing a busy optical clinic and also obtained her Opticians Licence in 2016 from the College of Opticians of BC.  She has an extensive collection of fun glasses and sunglasses, and loves to show off her colorful personal style, often sporting bright colors in blues, purples or almost any color you can imagine in her glasses, wardrobe and even in her haircolor!

Auliya and her husband spent many years as performing musicians around Nanaimo as The Auliya Vicious Band, or just as Auliya Vicious. They sold out many shows at the Dinghy Dock Pub, The Longwood Brew Pub and many other venues. She has recorded a few singles and has many performances on YouTube as well. These days, Auliya has been following other creative influences with Acrylic paintings of seas and skies as well as fiber art crochet and crochet wearbles.

When she isnt being creative, Auliya is spending her time with her 2 cats: Vala Mal Doran who is a 15 year old diabetic girl with a lot of spunk and attitude, and Freija the Glorious who just turned 3 and is a beautiful bundle of craziness being half siamese and half tabby.  Auliya was born on Gabriola Island, but has spent her entire adult life in Nanaimo. Auliya has just joined on with Eye Care Nanaimo team this year.